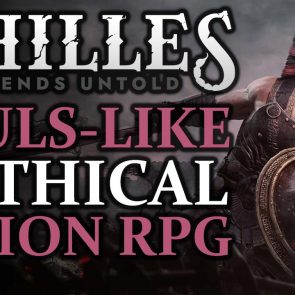 Developer Dark Point Games proudly unveiled its Story Trailer for its first game, Achilles: Legends Untold. The video follows the narration of a hapless warrior who unluckily faced Achilles in battle. He describes the hero as a “raging bull”, and how he easily dispatched the narrator as well as his companion. Another speaker says he has never “witnessed so smart, deft and cunning warrior”. 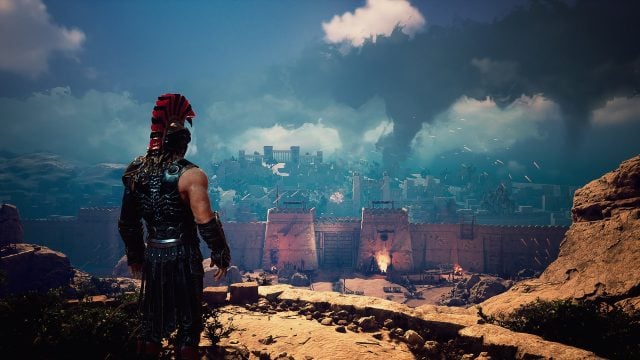 Everyone seems to fear this legendary figure. And with the footage we see in the trailer, we can definitely agree with them.

What is Achilles: Legends Untold?

Players will take the mantle of the titular hero, Achilles. He is stuck between the wars of Hades and Ares. This mortal will journey throughout Greece as well as many mythological lands such as Tartarus. 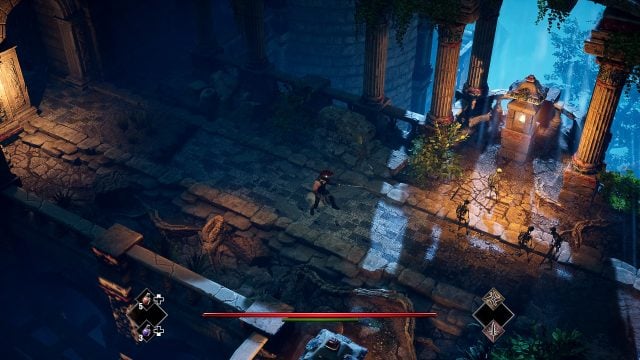 Fight Through the Underworld

The game is a top-down isometric action RPG, similar to things like Grim Dawn and Titan Quest. Much like Titan Quest, the game features a beautiful Greek Mythological setting, filled with amazing temples, Greek weapons and armours, as well as fearsome creatures and gods. At its heart, Achilles: Legends Untold is a hack and slash game.

Achilles will also feature co-op gameplay for players who wish to slay with their friends.

Souls-like with a Soul

Unlike Titan Quest, however, this game promises to have souls-like elements integrated into its systems. The game will be more skill-based than relying heavily on stats. The developers explain that a game being difficult isn’t the sole reason to call something “souls-like”. Instead, they promise that the elements that attracted fans in the first place will take centre stage. The game will include “challenging, methodical battles, extensive world exploration, and deep lore. Just picking up a controller will make you feel like a fish in water.” 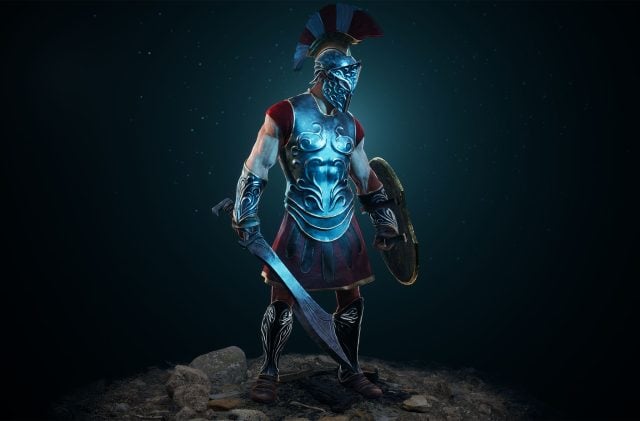 Another souls-like feature that they will integrate into Achilles is the fact that the world contains so much mystery that players have to discover on their own. Combat will also take a lot of practice and will train players to make use of muscle memory to hone their reflexes. 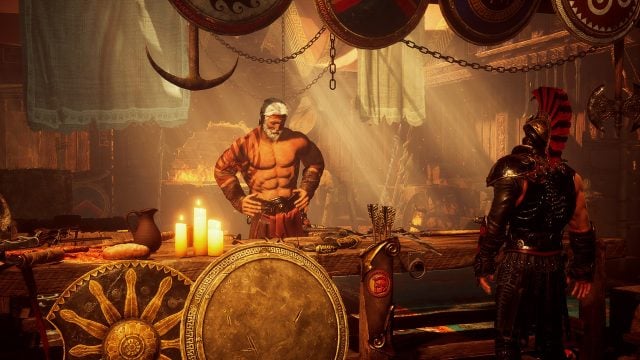 Dark Point Games are clearly fans of other FromSoftware Games such as Bloodbourne and Sekiro. They’ll probably take a long break from work in February since Elden Ring will take at least 30 hours to complete.

GAIA, the Greek Goddess of the Earth

Combat will be tactical and promises to be more interesting than standard ARPGs that we’re used to. Introducing GAIA, the AI system that Dark Point Games is making use of to build up challenging encounters for players. 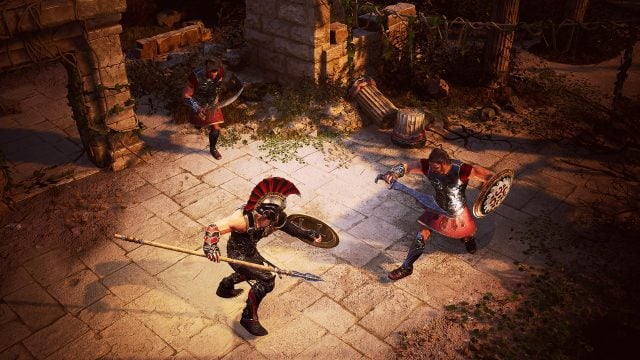 Enemies will be Powered with GAIA AI

The AI system, GAIA is being built up using the Hierarchal Task Network AI planner, which is one very popular tool that Deep AI coders use. With this, the developers are trying to make each of their in-game characters quite intelligent, believable as well as challenging. Actors will react not only to the players’ actions but even with other NPCs or even the environment. 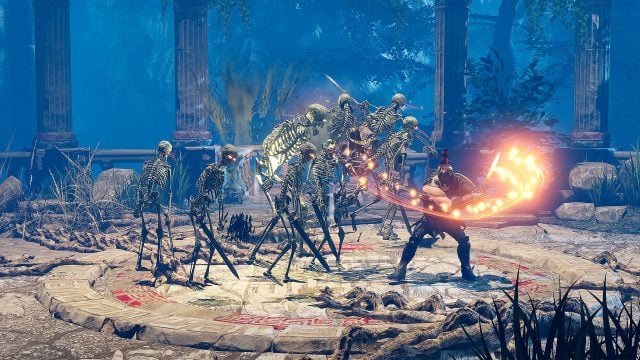 GAIA analyzes every combat situation and oversees the enemies as well as the environmental situation, triggering decisions based on what is available. A prominent example in the trailers involves how a soldier and archer can interact and try to attack the player. The shield-wielding warrior will crouch down and raise his shield above his head. His companion will then run up the shield and use it as a jumping point to leap high into the air. This then enables him to get a height advantage against Achilles and launch arrows from up above.

Another scenario involves two warriors. Instead of launching an archer upward, the kneeling soldier can propel his ally towards Achilles, giving him a big enough force that could potentially knock down our hero. A more simple example would have shielded units protecting more fragile targets such as archers or mages. GAIA tries to make enemy units cooperate with each other in these kinds of ways.

So what kind of foes will we expect from Achilles? We’ll have regular Greek soldiers, armed with various weapons from that era like swords, shields, bows and spears. As mentioned previously, GAIA will bless these foes with superior tactics and battle knowledge to take down the player. 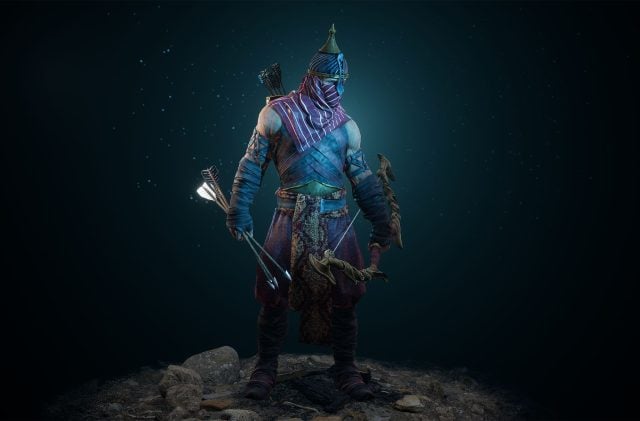 Aside from that, we will have mythological creatures of course. There aren’t many specifics, but they did introduce a majestic (and terrifying) Griffin enemy. Bosses will be memorable characters, as unique fights are the bread and butter of the souls-like genre. A neat twist though is that not all bosses in the game should be killed. How this will affect gameplay though, has yet to be revealed. 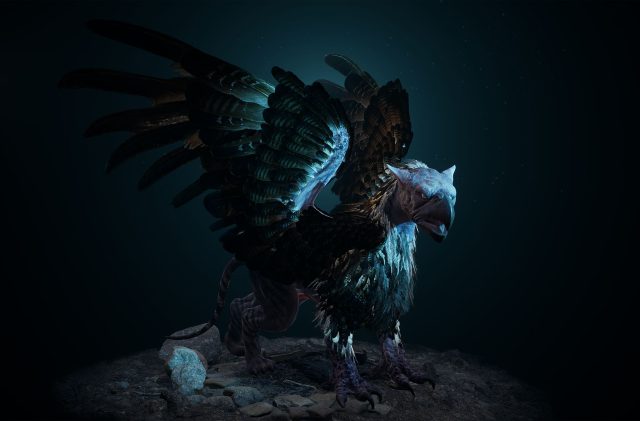 Closed Beta and Beyond

The Closed Beta is currently available from January 27th until February 10th. Those who want to take part can check out the Achilles: Legends Untold Steam page and sign up for closed beta via the official Discord.

Achilles is set to release into early access in Q2 of 2022. It looks like Dark Point Games is doing very well and should hopefully release a great product in the near future. Let’s just hope they don’t get struck in their Achilles’ heel. For more ARPG coverage, be sure to check out our top 10 ARPGs to play in 2021.

Fall Guys Is Getting a Level Editor

Off Topic: This year’s UK Eurovision entry really reminded me of one of the weird classics of sci-fi