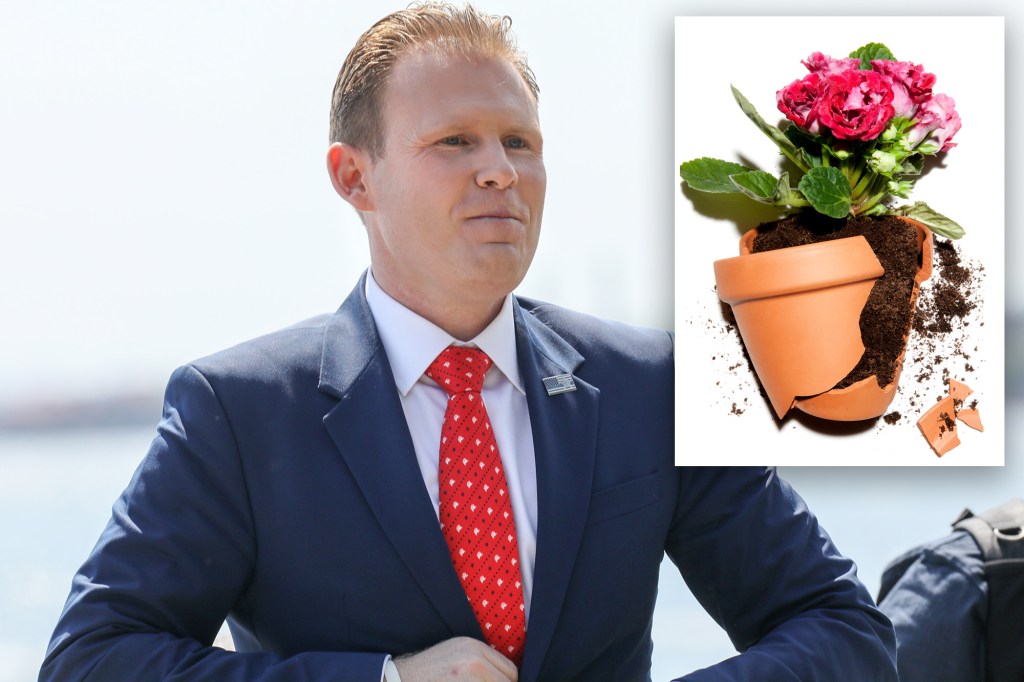 The Big Apple is really going to pot.

GOP gubernatorial candidate Andrew Giuliani was hit in the face with a flower pot as he tried to break up a fight near Penn Station.

The 35-year-old son of former Mayor Rudy Giuliani told The Post he witnessed a man and a woman having a violent confrontation last Saturday on 28th Street as he walked to a meeting with Gavin Wax, president of the New York Young Republicans.

“I got between the two of them,” Giuliani said. “He had a flower pot. I think it was intended for her but it hit me on the left side of the face. Thankfully it was a plastic pot and not a clay pot. The soil mostly hit me. But I wan’t expecting it. It was a little bit of a shock.”

The candidate said he heard the woman screaming “you leave me no money bitch,” shortly before the man took a swing at her. Giuliani said the man also threatened to “beat the s–t” out of him as he started calling 911.

Cops arrived on the scene about 15 minutes later and a police report was filed.

“There are no arrests at this time,” an NYPD spokesperson said. Giuliani said he was asked to look at a police photo array of possible suspects. He fingered one of them but told cops he couldn’t be 100% sure.

“It’s deteriorated,” Thomas Weisse, owner of Caribbean Cuts Flowers & Foliage said. “You have to pay a lot more attention coming to work and leaving work than you used to. The entire city is that way.”

Mayor Adams has promised to rein in violent crime and return law and order to city streets. But critics say his efforts will likely be frustrated by Manhattan’s new district attorney Alvin Bragg, who has said he will not seek jail time for a whole host of crimes.

“You don’t have to be a wizard to realize that if you don’t prosecute crime and you have no bail that criminals are going to be out and active,” Weisse said.

Giuliani said he had “no confidence” that the perp would face any punishment with Bragg at the helm and said he would his use constitutional authority to remove Bragg on Day 1 should he be elected governor in 2022.

“Any DA which violates their oath of office … I would relieve him of his duties,” Giuliani said.

BPD Community Alert: The Boston Police Department is Seeking the Public’s Help in Identifying the Following Individual in Connection to a Recent Aggravated Assault in Roxbury — bpdnews.com