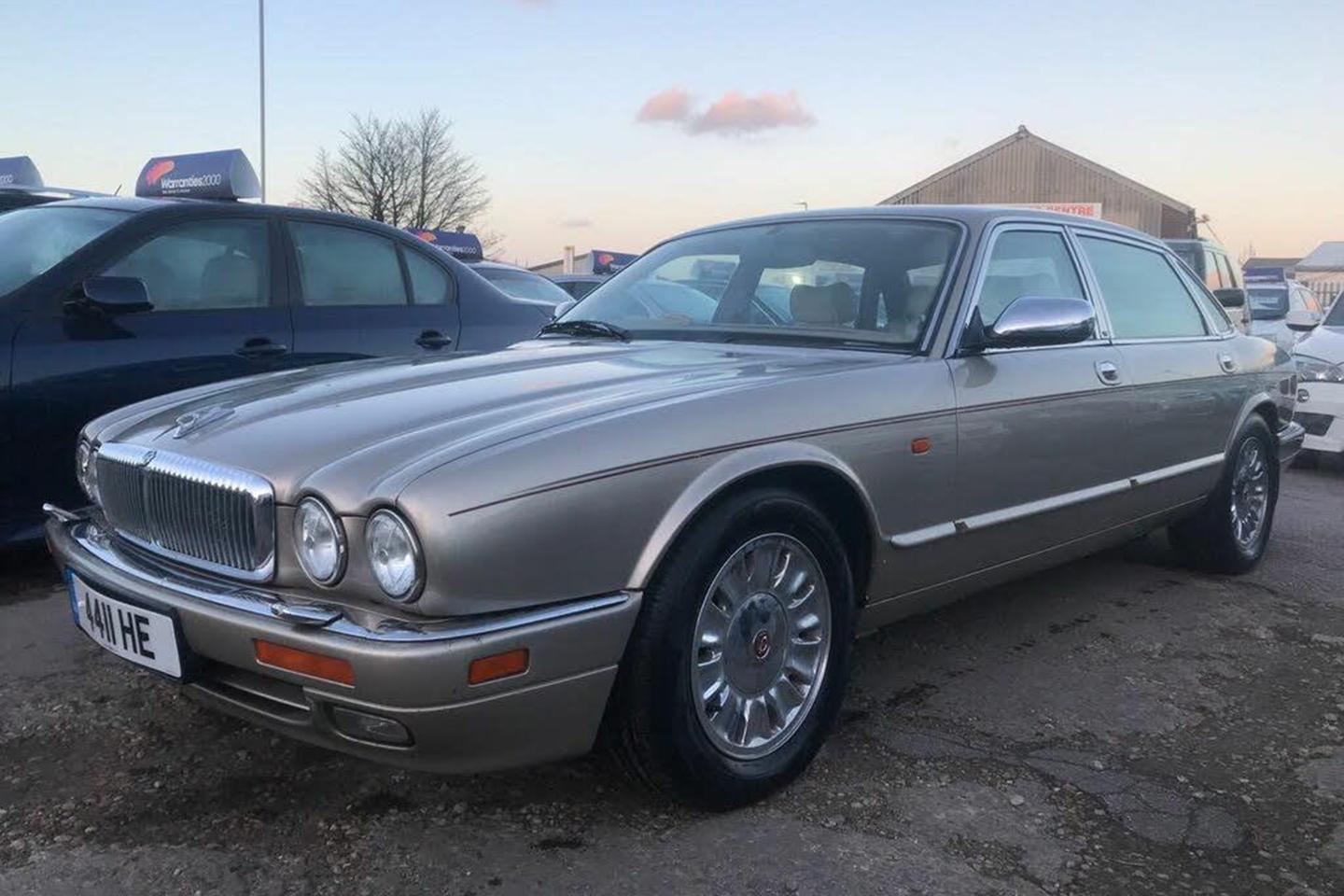 The 12-cylinder saloon is an endangered species. Four of the five manufacturers who still produce them have confirmed they won’t be doing so for much longer – Audi, Bentley, BMW and Rolls-Royce. Leaving only Mercedes, which – despite featuring a V12 in the recently launched S-Class – is likely to join the exodus as the end of combustion approaches.

Yet some other members of this ultra-exclusive club resigned their memberships long ago. Jaguar had combined V12 power with four-door practicality before any of the manufacturers listed above except Rolls-Royce, yet produced its last example when New Labour was still shiny and new – and John Prescott was newly installed as deputy Prime Minister.

That non sequitur has got the PH house drummer cued for a rimshot. Because the one-time member of parliament for Hull East latterly became famous for owning two Jags – but here’s one that could have saved him the trouble. A Daimler Double Six has to be twice as nice as a common-or-garden XJ, am I right? 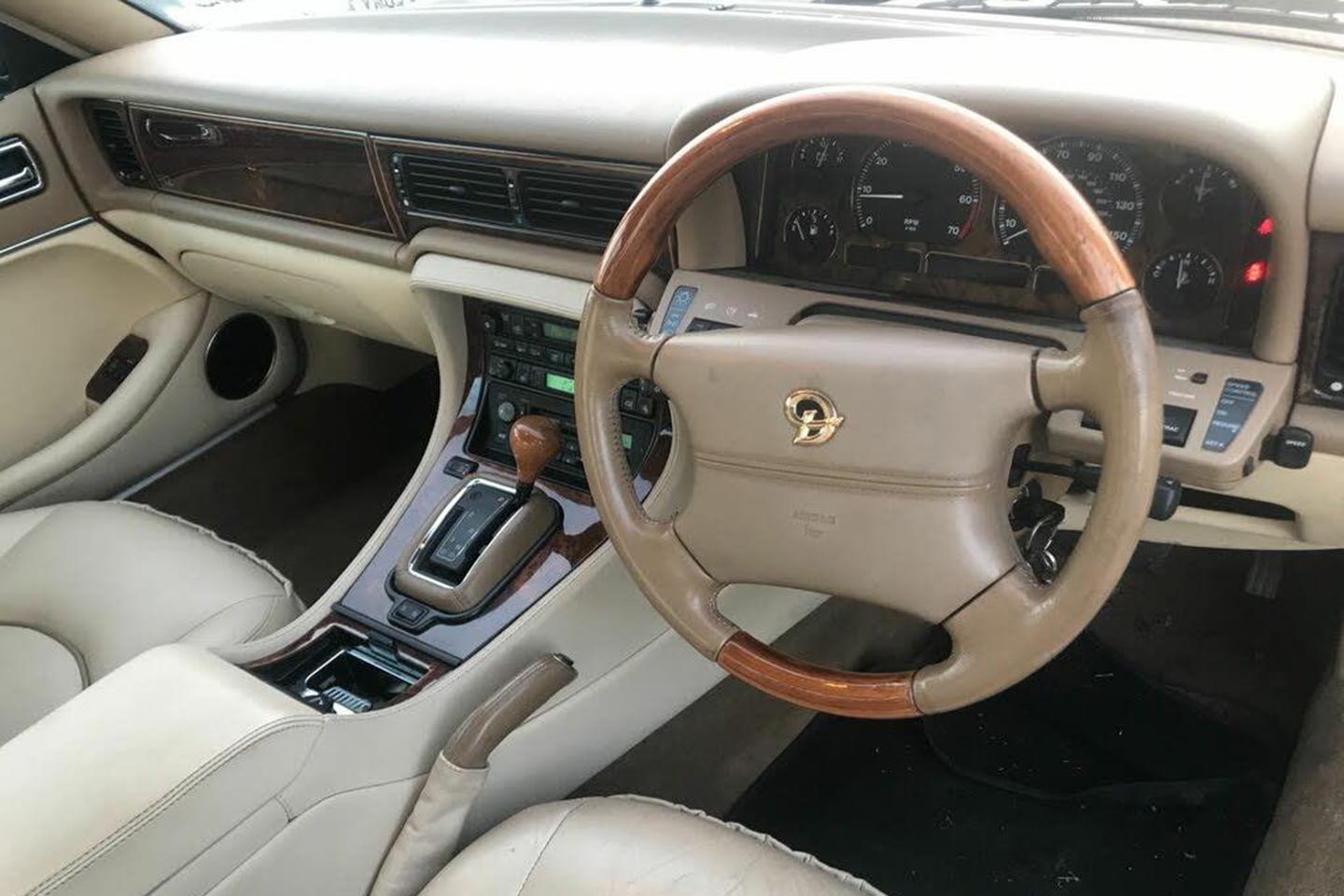 Before you go to get your sides stitched, calm yourself down with a brief consideration of the history of the Daimler name, one which is both mildly interesting and highly confusing. Founded in 1896, the British-based Daimler Motor Company bought rights to use the name from Gottlieb Daimler and his German firm. Perhaps fittingly, considering the history of Anglo-German relations during the first half of the 20th century, Daimler became a subsidiary of the Birmingham Small Arms company in 1910, and was then acquired by Jaguar in 1960. Meanwhile, in Deutschland, Daimler Moteren Gesellschaft merged with Benz & Co to form Daimler, although its cars are marketed as Mercedes-Benz. Hence two unrelated companies using the same name, although one as a corporate identity, and the other for actual models.

While some pure Daimler models continued to be produced after the Jaguar acquisition these didn’t last for long – with the exception of the DS420 limousine, which was used by minor royals, grander municipal mayors and funeral directors into the 1990s. Further down the range Daimler became, effectively, a trim level for the poshest Jaguars.

So when Jaguar brought out the first XJ in 1968 to widespread acclaim there was no surprise when a further upmarket Daimler Sovereign version arrived within a year. And when the Jag made the equally inspired decision to squeeze the V12 that had been developed for the E-Type into the XJ in 1971 the mechanically identical Daimler Double Six followed in similarly short order, its name reviving a badge that had first been used as long ago as 1926. 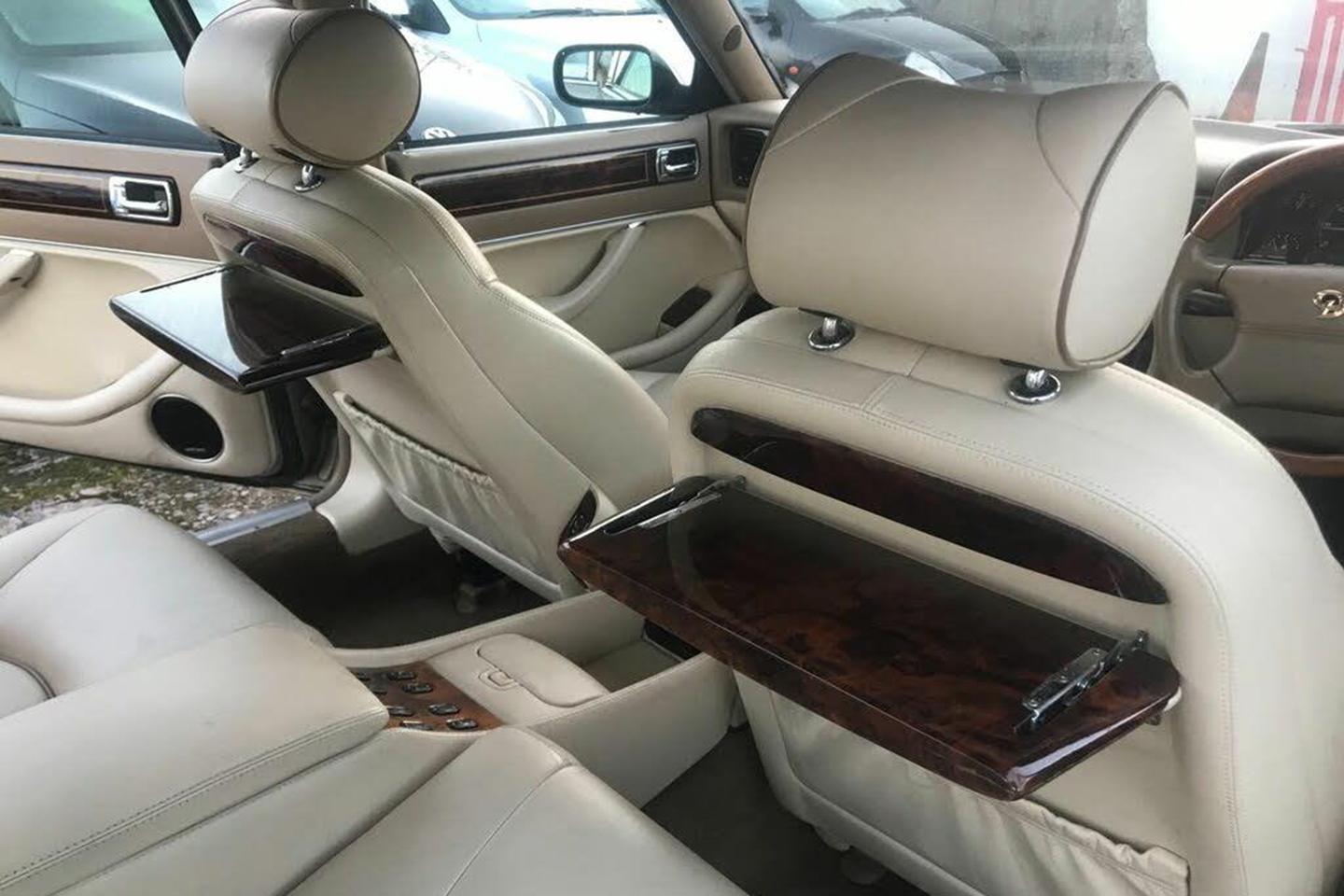 It was the pinnacle of what was probably the most advanced performance saloon in the world at that point, the XJ12/ Double Six being the only production four-door at the time to feature V12 power. A peak 266hp from the 5.7-litre carb-fed engine might not look like much to modern eyes, but it was sufficient for an 8-second 0-60mph time, despite a three-speed autobox as soggy as a punctured water bed, plus a claimed 140mph top speed.

Daimler versions were marketed alongside XJs for the next three decades, offered for substantial premiums and selling in far smaller volumes. By the early 1980s demand had fallen far enough that Jaguar dropped Daimler branding in Europe, only to bring it back shortly afterwards when continental buyers started ordering the distinctive fluted radiator grilles and badges from the UK to unofficially convert their cars to full Daimler spec. The company clearly thought Americans would struggle with the subtleties of understanding Daimler v. Daimler, so the same models were marketed over there with Vanden Plas branding.

Although the V12 had been tweaked and tuned through the years, it was struggling to stay competitive against more modern rivals; the very success of the earlier versions was the main reason Mercedes, BMW and ultimately Audi all started to make their own 12-pot saloons. In its ultimate 6.0-litre format as fitted to the X300 XJ it was producing 320hp, a figure which was comprehensively outgunned by the Ford-engineered supercharged V8 that was first fitted to the successor X308. Daimler branding survived a while longer, being quietly dropped when the X350 XJ received its final facelift in 2007. The badge has been gathering dust in JLR’s corporate branding drawer ever since. 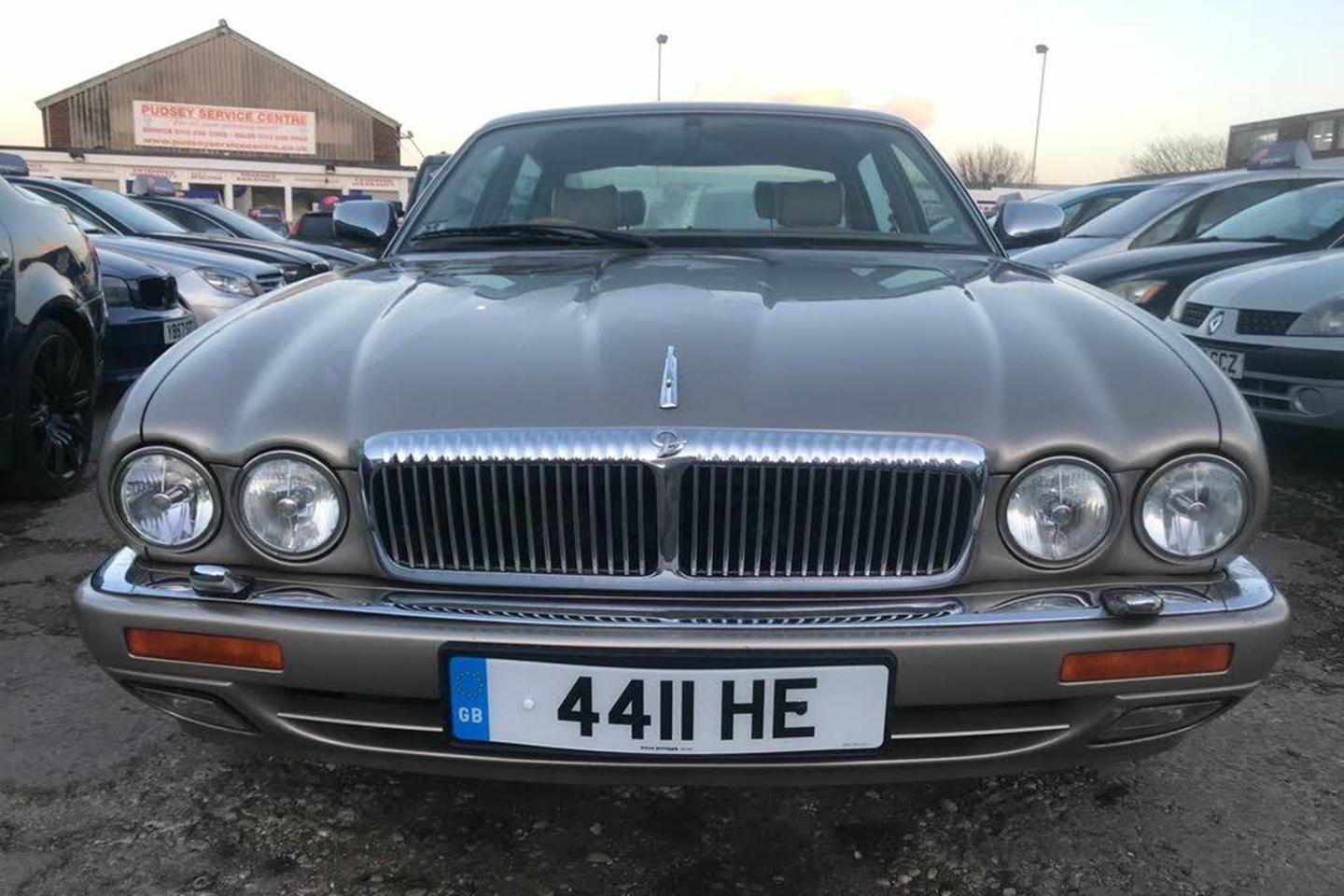 Our Pill is doubly blessed as both a Daimler and a V12, in this case a 1996 X300 that has covered 136,000 miles in the last 26 years. All of which, according to the advert, have been in the care of a single owner. The combination of what the DVLA regards as beige – more metallic sand in the pictures – and a magnolia interior is very much off its time. But you could also argue that makes it a valuable historic document. Although there is evidence of wear and discolouration in some of the interior shots, although the walnut picnic tables that fold from the front seat backs look barely used, the available angles of the outside show paint that looks crisp and even. You’ve got to love a car that comes with its original factory tool kit in addition to what seems to be a full set of original sale documentation.

The MOT history gives more cause for optimism. The last test expired in November, but the dealer promises a fresh one with the sale. The record confirms that mileage accumulation has been done gently in recent years, the car having added just 15,000 miles since 2006, but also has a couple of gaps that suggest it has been laid up for periods. But while there have been advisories and failures, none have been for anything too scary: what seems to be a broken Lambda probe, an excessively worn suspension ball joint and a graunching wheel bearing are the worst of it. There is no mention at all of corrosion, something which can get its teeth into X300s, although potential buyers will probably want to do their own in-person research on that score.

In another first for the column, our Pill is also being offered with the ageless private plate it wears included in the asking price. The dealer’s assertion that this is worth £1,500 is necessarily untested; it may well be if your name is Harry Edge and you were born in November 1944. But it’s always nice to have something extra thrown in. For £6,995 it looks very attractively priced considering the premium often being sought for rarer examples of mainstream cars; it is both the cheapest Daimler and the cheapest car of any sort fitted with a V12 in the classifieds. What do you reckon: double or quits?

2021 Was The Worst Year On Record For Bad Airline Passengers