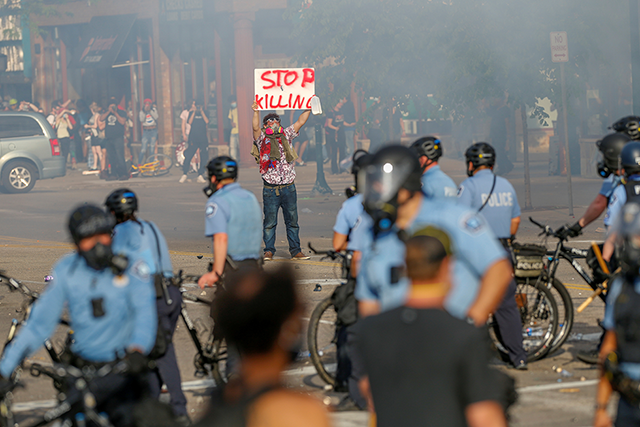 I have never seen the musical “Hamilton.”

Shocking for such an active political person, I know. But as I reached out to friends with my concerns about the rules of secrecy around the Minneapolis mayor’s new workgroups — and their stipulations of silence for participants — I have had several friends quote the song, “The Room Where It Happens.”

Everyone in Minneapolis deserves to have what they need to survive, someone to call when they need help, and to not fear the help that may come. I joined Mayor Jacob Frey’s Community Safety Workgroup six weeks ago with the hope to find common ground with others hoping to make Minneapolis safer, and to bring forth my years of work on alternatives to policing.

I believe that it is possible to come together across differences to advance solutions that we can all agree on. And I expected disagreement on how to approach the issue of violent policing —  but it was my hope that a public workgroup would allow space for many options to be documented and shared for the public, city staff and electeds to consider.

However, I am resigning from the Community Safety Workgroup.

First, closed door meetings do not align with my values. I think that the best problem-solving happens out in the open, and I was unable to persuade my fellow group members to adopt a transparent approach.

Public meetings on charged topics always carry the risk of certain media going for the sensational headline and glossing over the nuance of the conversation —  something that has been described to me as a distraction risk. However, I think the benefits of public process far outweigh the risks, and with virtual meetings, it’s easy to make them available to the public. We only have to look as far as our neighbors across the river. The Saint Paul Community-First Public Safety Commission live-streamed all of its meetings without issue. Would it be so different in Minneapolis?

Second, I’m a budget person (my personal slogan is, “from the streets to the spreadsheets”), and this workgroup as structured is also not a good use of city resources, including the collective 200 plus hours of city staff’s time. I believe the resources could be better spent on carrying out the city’s multiple community safety pilots, ramping up grassroots safety strategy development, or giving the Office of Violence Prevention a full-time evaluator so we can see which pilots have worked and which haven’t, and build our strategies from data.

We need solutions, and in fact we already know a lot about how to prevent crime before it happens. Evidence shows that housing, youth programming and mental health care all build safer cities, often at a fraction of the cost of policing. And yet, for every $1 the city currently spends on the Minneapolis Police Department (MPD), only 6 cents is spent on violence prevention, 11 cents on affordable housing and 2 cents on youth mental health. In 2021, with the amount of money spent on helicopters to find car thieves (only charging five people), how many teens could have been given summer jobs in the parks or put in after school programs? Across the board, the “both/and” math simply doesn’t add up.

I don’t think small, incremental reforms to policing are going to bring the change we need either. We have been trying to reform the police for a long, long time. Cops think that they are above the law, and they are — the Hennepin County sheriff is a perfect example. Hennepin County Sheriff Dave Hutchinson, like former MPD police officer Derek Chauvin, assumes he can do what he wants and the system will protect him. And current evidence shows law enforcement that this is overwhelmingly true.

Since swaths of MPD officers blinded, maimed and traumatized demonstrators after the murder of George Floyd in 2020, the only one to be disciplined was a whistleblower. Police have resisted being reformed, and many of the tasks assigned to police would be better done by other members of our community. When it comes to ending the violence of policing, prisons and surveillance, change requires big, structural change, not incremental reforms.

People in Minneapolis are hungry to have conversations about safety, policing and justice. As community leaders chosen for this safety workgroup, we had the opportunity to lead by example and have difficult conversations in public. That won’t happen, but curious residents can check out Reimaging Community Safety through community education, support REP, a small alternative to police, and build up transformative justice skills.

Process is as important as product in government. It’s not enough for me to just be in “the room where it happens.” I trust in the people’s ability to observe and analyze what’s happening and be involved along the way, not just be handed intermittent “broad overviews” with a final report afterward. The decisions that point us toward justice and safety for all are going to be the ones that happen right out in the open.

Sheila Nezhad holds a master’s degree from the Humphrey School of Public Affairs at the University of Minnesota. She has been a community organizer in Minneapolis for the past 10  years, and currently works as a policy analyst with Reclaim the Block. She ran for mayor of Minneapolis in 2021.

Want to add your voice?

If you’re interested in joining the discussion, add your voice to the Comment section below — or consider writing a letter or a longer-form Community Voices commentary. (For more information about Community Voices, see our Submission Guidelines.)