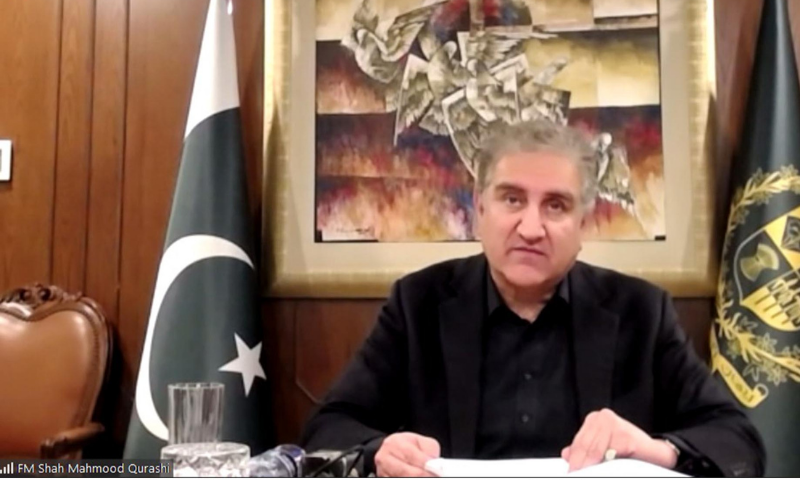 UNITED NATIONS: As Pakistan assumed the chair of the Group of 77 on Friday, Foreign Minister Shah Mahmood Qureshi urged the international community to help developing countries recover from the impact of the Covid-19 pandemic.

“Developing countries cannot recover if their budgets are further constrained by austerity packages, imposed increases in energy prices, and weakening of their currencies. No country must be prevented from serving its people,” he said in his virtual address to the annual meeting.

The Group of 77 (G77) is a coalition of 134 developing countries in the United Nations, designed to promote their collective economic interests. Pakistan will chair the group for the year 2022.

Pakistan is one of the founding members of the Group and has had the privilege of serving as its chair in New York on three occasions in the past.

Mr Qureshi presided over the proceedings of the opening segment of the handover ceremony held in a virtual format, and also attended by the outgoing Chair (Guinea), UN Secretary-General, and President of the UN General Assembly. The foreign minister pointed out that more than 20 developing countries were in debt distress, and some had already defaulted. “Over 20 countries are food insecure. Famine stalks some, especially in conflict zones in Africa and in Afghanistan,” he warned.

Mr Qureshi identified the triple crisis — the Covid-19 pandemic; the related economic downturn; and the threat posed by climate change” — the world was facing today.

The foreign minister pointed out that this public health crisis had affected the developing countries disproportionately.

“Both because of weak health systems and meager resources, millions in our countries have suffered enormously and mostly in silence. Apart from lost lives, over 150 million have been pushed into extreme poverty,” he said.

Mr Qureshi called for universal distribution of vaccines as the best response to the mutating virus.

The foreign minister reminded the international community that while rich nations had injected over $17 trillion to revive their economies, “most developing countries are still in the grip of the most severe recession in a century”.

He underscored the need for debt restructuring; fulfillment of the 0.7 per cent ODA target; redistribution of the $650 billion new SDRs; and larger concessional finance from the IMF and the multilateral development banks. He also stressed the need to curb the illicit outflow of trillions of dollars from developing countries.

Acknowledging the importance of a healthy environment, the foreign minister urged the industrialized countries to play the lead role in undoing the damage, adding that all climate actions must adhere to the Principle of Common but Differentiated Responsibility.

You’re Probably Sleeping In The Wrong Position For Your Body