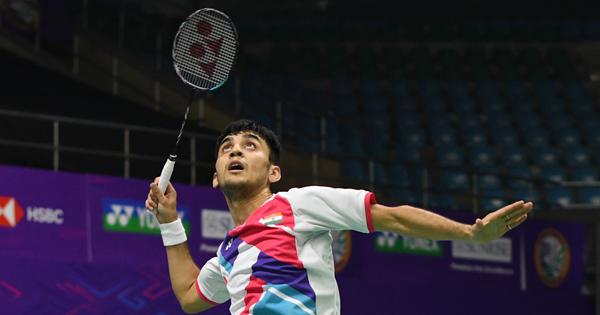 Winning, they say, is a habit.

During his journey to clinch the bronze medal at the World Championships on debut, Lakshya Sen was on two sides of closely-fought matches. One, in the quarterfinal, where he had to save a match point in a three-game battle against China’s Zhao Jung Pen. The other, in the semifinal, where he went toe-to-toe with Srikanth Kidambi, gave us an all-India match to remember, but just couldn’t close it out in the end.

Since then, he has been mainly focussed on recovery. He enjoyed a grand welcome back home. And yes, he managed to catch Spider-Man: No Way Home. Check, check and check on the things he wanted to do at the end of a gruelling season.

But, there is little rest for the wickedly talented.

Back in action again, making his debut at the India Open Super 500, he had to contend with another big test. There hasn’t been much time to practice and get up to full speed in the mini-break (if one could call it that). It was just about getting in rhythm and seeing where his body was after the recovery from niggles that had bothered him at the end of last season.

And in a battle of very fine margins against HS Prannoy in the quarterfinals, Lakshya had to win to just keep the momentum going. Having already run Srikanth close in Huelva, this was another test for Lakshya and one he eventually aced. The 20-year-old fought back from a game down to win 14-21 21-9, 21-14.

“In the first game I tried playing really fast, I made few errors at crucial stages at 13-13… that cost me the game,” Lakshya said after the match. “I wasn’t very patient and giving away easy points. I think that was the key, he pulled ahead really well in the end.”

That’s when his new Korean coach Yoo Yong Sung told him not to worry because the game was still in the balance. ‘Just cut out the errors and start trusting the rally game’; that was the message and he trusted it.

“Second game I was a bit more patient, started well, and then had a lead throughout the game so was able to finish it. Third game, again, he started well and in the beginning I gave a few easy points. But yeah, managed well from there. Once again started playing but more patiently, trusting my rally game. That was working well for me, so stuck to that,” Lakshya said.

In the decider, Prannoy again took the early initiative, opening up a 6-1 advantage but couldn’t sustain it as Lakshya moved to 11-9 at the interval and then pocketed nine of the next 11 points to seal the match in his favour.

Prannoy evidently wanted to impose his presence on the game in the opening game, and he was letting Lakshya know it. The winners were met with roars that echoed around the stadium. The 29-year-old, who has been in good form himself, set the tempo early on and it just put Lakshya off before he could recover.

“Both of us really playing fast in the first game, pace of the game was high. The aggression was there too, but as the game went on, it became a little bit slower… as I started to rally a bit more. But yeah, in the first game both of us were trying to push the pace and take advantage. The pace slowing down helped me eventually,” Lakshya added.

“Towards the end, I was looking a bit better than him [physically] and I was confident about rallying it out. I think I was comfortable, the rallies were really good in the third game.”

And just like that, in the space of one month, Lakshya has followed up with impressive performance against Srikanth with a win against Prannoy in two thrilling matches. His place among the best men’s singles players in the country is secure. It has been a good experience for his growth.

“Srikanth is tricky with every shot he plays from the net, a little bit more attacking. Prannoy bhaiya also has really good defence, can rally it out sometimes. Both of them have a little bit different kind of game,” Lakshya said later, comparing the experience of playing the two senior pros.

And his immediate attention will be to win the semifinal. Lakshya, seeded third, will square off against Malaysia’s Ng Tze Yong and should he win that, could set up a cracking final against world champion and fellow training partner in the recent past, Loh Kean Yew.

But overall, the world No 17’s target is to be consistent physically and break into the top of the rankings.

“This year we really have to be at our best and remain injury-free. A lot of tournaments are coming up like the Asian Games, Commonwealth Games, All England, the Thomas Cup. I didn’t have much time to train with my coaches before the India Open but after this and Syed Modi, I’ll have like a month or so to train and get back my fitness levels and plan some tournaments. It’ll be important to plan which tournament to play and which to not play,” he said.

“In terms of rankings, I want to break into top 10 next, I am waiting for BWF to unfreeze rankings so that I can improve my rank by that also, but yeah definitely trying to get to top 10 next.”