ISIS Bride From Alabama Loses Supreme Court Appeal to Return to the U.S. 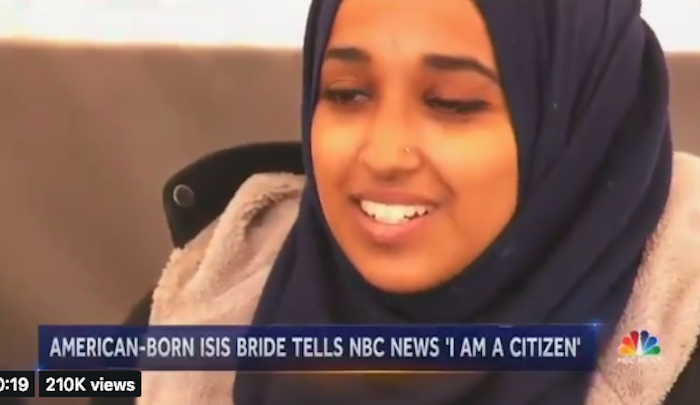 My latest in PJ Media:

On Monday, according to the Associated Press, “the U.S. Supreme Court has refused to hear the appeal of a woman who left home in Alabama to join the Islamic State terror group, but then decided she wanted to return to the United States.” And so Hoda Muthana, just your average hijab-wearing Alabama gal who decided one day to go to Syria to join the Islamic State (ISIS), and whose whereabouts are currently unknown, will not be returning to the U.S., at least not anytime soon.

In declining to hear Muthana’s appeal, the Supreme Court at least in this instance was showing a refusal to bow to public pressure. That pressure has been going on for years. In 2019, when Muthana was initially barred from returning, NBC News ran a sympathetic piece on her as a down-to-earth girl who made a mistake. She says she “regrets every single thing” she said in those halcyon days of the Islamic State and thinks it is only just to let her come back to Sweet Home Alabama: “Anyone that believes in God believes that everyone deserves a second chance, no matter how harmful their sins were.”

NBC News certainly agreed. Hoda, NBC told us, spoke to them from a “refugee camp in Syria where she and her 2-year-old son, Adam, live in a tent.” She “now claims to reject the extremist ideology that she once espoused so freely online,” but that isn’t good enough for “Islamophobic” American officials: she faces, said NBC, “an uphill battle to be allowed back into the U.S.”

Meanwhile, the poor girl was suffering:

And simply getting by day to day is a struggle, she says. She says she finds it “hard to get up in the morning” and, despite being moved from the larger al-Hawl refugee camp for her own safety, is scared of retribution from whom she calls the more radical women around her. She also claimed to be afraid of speaking out, saying it could result in her becoming a target. “I am risking my life doing these types of interviews,” she said.

Not only that: “I’m scared of my son being here. We can’t afford bottled water, so we have to drink the tank water and … it causes stomach aches.” And fumes from oil fields in the vicinity give her and Adam headaches “every day, every hour almost.”

According to NBC, Hoda Muthana’s plight, her fear, her difficulty getting out of bed, her stomach aches, her headaches, her day-to-day struggle, was the fault of — who else? — Donald J. Trump, who said in 2019 that he had ordered then-Secretary of State Mike Pompeo not to allow Hoda to reenter the United States. The Trump administration contended that Hoda was not an American citizen, for while she was born in New Jersey, she was the daughter of a Yemeni government official who was only here temporarily and so was not entitled to birthright citizenship. Pompeo also bluntly stated the core of the problem with her returning to Alabama: “She’s a terrorist.”

There is more. Read the rest here.

Major airlines cancel, change flights to US over 5G dispute