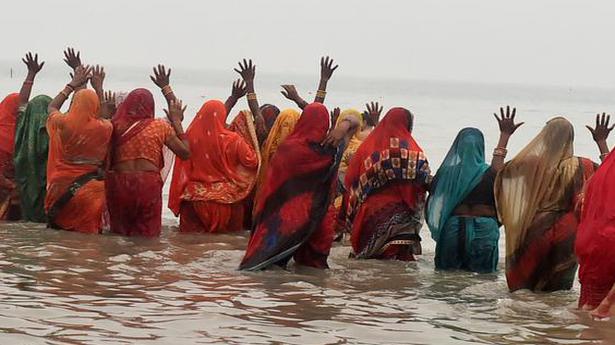 There was, however, no untoward incident like drowning at the Ganga Sagar Mela, considered the biggest religious congregation after the Kumbh Mela.

Lakhs of pilgrims took their holy dip at Ganga Sagar here on the occasion of Makar Sankranti on Friday, Januay 14, 2021, with a section of them giving the go by to the COVID-19 safety protocol.

A number of them were seen roaming without masks and government officers had a harrowing time enforcing the COVID-19 norms.

RT-PCR tests were carried out as part of the measures to check the spread of the disease.

There was, however, no untoward incident like drowning at the Ganga Sagar Mela, considered the biggest religious congregation after the Kumbh Mela.

“This year the number of pilgrims is significantly less than last year. It is around 20-25 per cent of last year’s congregation,” West Bengal Power minister Aroop Biswas told a press meet here.

Mr. Biswas, however, refused to divulge the number of the devotees who had arrived in the Island and taken the holy dip this year.

Around 15.5 lakh pilgrims had arrived at Sagar Island during Makar Sankranti in January 2021.

Senior government officer of South 24 Parganas district said only those who were fully vaccinated and tested negative for COVID-19 were allowed to enter Sagar Island, situated at the confluence of the Ganga and Bay of Bengal, to attend the Mela.

An official statement said only one pilgrim was confirmed as COVID positive in the random testing before entering the Mela ground and was sent to isolation.

At Babughat and nearby areas in Kolkata, where pilgrims gather for their onward journey to Sagar Island, another 43 tested positive.

The holy bath began at midnight and devotees from different parts of the country gathered at the confluence braving the cold and steady drizzle. They also offered prayers at the Kapil Muni temple here.

The holy bath will continue till 12:30 pm on Saturday.

According to locals, physical distancing norms went for a toss during the dip even though disaster management and civil defence personnel, the police and volunteers maintained the COVID protocol.

Several pilgrims were seen without masks even though officers and volunteers kept cajoling them to abide by social distancing norms and to wear masks.

The devotees and sadhus flashed the V sign after taking the holy bath.

“After I took a dip in the Ganga, all my sins have been washed away and the virus can never touch me,” said a pilgrim standing in waist-deep water.

Some devotees were seen singing and dancing to thank God for allowing them to come to Ganga Sagar.

“There is a saying “Shob teertha baar aar, Gangasagar ekbar (You can visit another pilgrimages several times, but Gangasagar you can come only once). The visit to Ganga Sagar suffices for the hardships that pilgrims face while coming here. I feel energized after the dip. I am not afraid of COVID-19 or any other virus,” another pilgrim said.

An official said that as of now more than five lakh pilgrims have taken their holy dip.

The district administration claimed that it regulated the proceedings at the Mela to a great extent and most of the pilgrims followed the instructions.

“We didn’t allow anyone without RT-PCR report and double vaccination certificate this time. The screening was done at all embarkation points, including Babughat in Kolkata and Namkhana in South 24 Parganas,” an official said.

Health experts were apprehensive that the congregation might become a super spreader at a time when the state government is grappling with curbing the spread of the highly infectious Omicron strain.

“When Kumbh Mela was held last year, we had seen how many people had tested positive after the event. We fear that Gangasagar Mela might be a super spreader,” a doctor told a TV news channel.

On Thursday, the preparations for the fair were inspected by a two-member panel formed by Calcutta High Court to monitor adherence to COVID-19 norms.

The committee, comprising retired Justice Samapti Chattopadhyay and a member of the state legal services authority, had asked the district administration to prevent overcrowding.

Biswas and state Women and Child development minister Shashi Panja are camping at the spot, coordinating with the district magistrate and other top government officers to ensure that the fair passes off smoothly.

Chief Minister Mamata Banerjee had on Wednesday urged the devotees to abide by COVID-19 protocol.

Every year pilgrims from various parts of the country and abroad gather at Sagar Island, about 100 km from the city, to take a holy dip on Makar Sankranti.

Dr. Zelenko On COVID And How He Developed His Z-Stack Approach — “A Gift From God”

The power of positive thought: The top two inches – Part 2