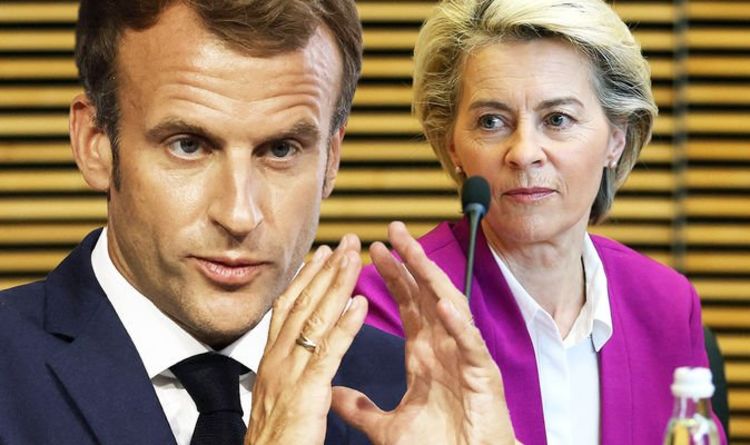 The news comes as France assumes the rotating presidency of the European Council, and the EU bloc previous pillar of strength, Ms Merkel steps down from her role in the political field. Mr Macron has made his desires for reform in the EU no secret, with the ideal opportunity to stamp his mark on Brussels, is this the chance that the French President has been waiting for.

Speaking exclusively to express.co.uk, James Shields, a Professor of French Studies at the University of Warwick said of Mr Macron’s ambitions: “Macron has long harboured delusions of grandeur in the role he seeks as the driving force for strengthening the EU.”

Adding to what Mr Macron wishes to achieve, the Professor said: “His ambitions for this role are not modest: reform of the EU’s budgetary rules, a new premium on EU defence and security, better migration management within a reformed Schengen area, a new alignment of economics and trade with climate objectives, and a new EU model for growth based on technological autonomy.”

However, for Mr Macron, the challenge of changing a supranational entity as powerful as the EU comes with many hurdles.

Professor Shield’s adds: “Does anyone remember a single change brought to the EU by the previous 6-month presidency of Slovenia?”

He continued: “That question does not diminish the messianic zeal of a French president already in his New Year address heralding the next 6 months as “a turning point for Europe”.

As to how the President goes about making these changes, Dr Paul Smith, an Associate Professor of French and Francophone Studies at the University of Nottingham says: “With regard to the EU, Macron has been a keen supporter of the citizen’s conference on the future of the EU -that’s his MO, he likes these sorts of discussions and focus groups.”

Mr Macron’s support of the EU was highlighted recently in the flying of EU flags across French government buildings and national landmarks to celebrate the French presidency of the EU council.

The move sparked a furious reaction from the public as well as from within the political arena.

Marine le Pen was one of the most vocal critics of the move, who had vowed to file a complaint with the state council, France’s highest court for administrative matters, called the removal of the EU flag “a great patriotic victory”. She tweeted that a “massive mobilisation” had forced Macron to backpedal.

With certain elements of the French political spectrum backing the rage, echoes of a “Frexit” were heard in small minorities, but may not be enough to remove the very pro-EU nation from the bloc.

According to Helen Drake, a Professor of French and European Studies, and Director of the Institute for Diplomacy and International Governance from the University of Loughborough, “The French public opinion does not support a ‘Frexit’ but there is Euroscepticism in France, on the right and the left of politics.”

With the Presidential election in France just months away, Mr Macron, who is yet to announce his candidacy for the role, has a delicate juggling act to play.

On the one hand, he now wishes to embrace France’s official role in the European Union by holding the rotating Presidency of the EU Council, a role that will no doubt require time and effort to achieve his ambitious goals.

Yet, on the other hand, the French head of state has a lot of broken pieces to fix at home.

His handling of the COVID-19 pandemic, the legacy of the yellow-vest movement, and the police brutality that accompanied it, as well as pension reform, islamophobia and the undeniable notion of a rising far-right and populist movement in France are all seen as a priority for the people of the country and are far more important to them, than the corridors of power found in Brussels.

Woman, 21, could be jailed after posing in lingerie with church in background