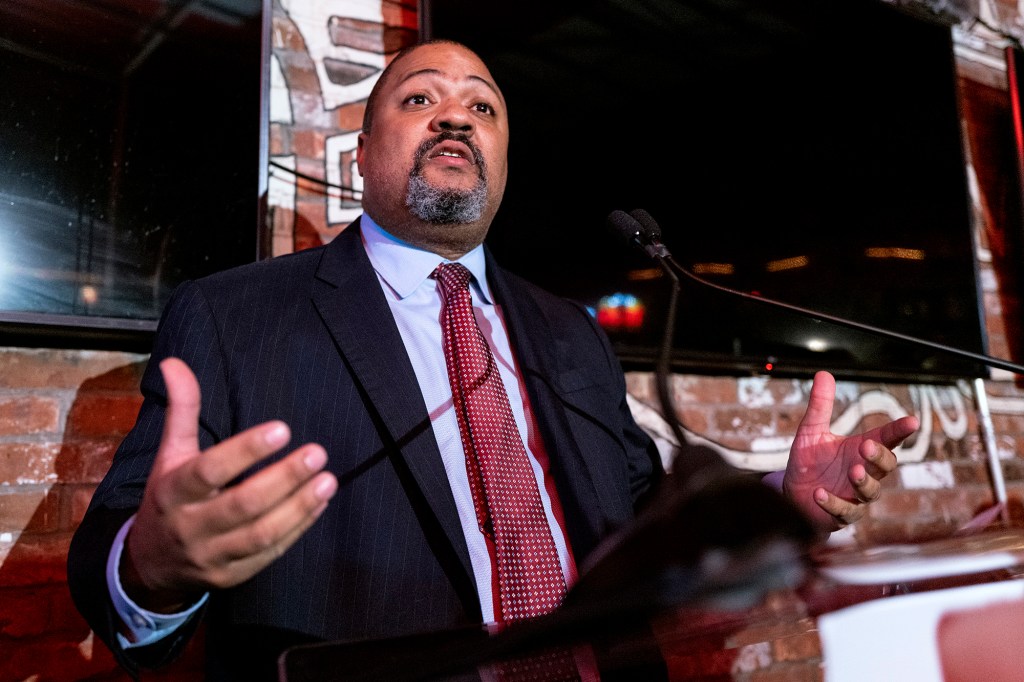 As he explains in his now-infamous “Day One” memo, “Data, and my personal experiences, show that reserving incarceration for matters involving significant harm will make us safer.” We’d like to see those data. As for his “personal experiences” — how about he saves those for his memoir?

Bragg’s farebeating policy isn’t a major change; his predecessor, Cy Vance, stopped prosecuting “theft of services” from the Metropolitan Transportation Authority in 2018. But stamping the DA’s seal of approval on fare evasion certainly isn’t going to improve the atmosphere on subways that are filthy, scary and often resemble a locked hospital ward on wheels.

Enchanted by his program of reform and desire to extend the benefit of the doubt to every miscreant in the borough, Bragg doesn’t care about the average straphanger. In fact, his lack of comprehension of the way the subway works is so profound that you would be excused for thinking he’s never ridden it.

Host John Berman asked Bragg a simple question on CNN’s “New Day”: “If you’re not going to prosecute fare evasion, why should I pay a subway fare?” Bragg responded, “If you’ve got an E-ZPass, and you go through the toll, they don’t stop you and arrest you there.” Instead, “they send you a ticket. That’s what we need to do on fare evasion.”

“The thesis is clear: The status quo’s not working,” Bragg added.

This non sequitur is hardly logical, much less a “thesis.” But other acolytes of chaos also love this tortured analogy. Public Advocate Jumaane Williams has fought a long battle against subway police patrols from his secure home on Fort Hamilton Army garrison and also likened turnstile jumping to driving across a tolled bridge without a transponder. “When was the last time someone asked for police to arrest drivers who don’t pay tolls?” Williams asked in October 2019, when the MTA began watching live feeds to spot fare evaders.

Williams repeated the point a few weeks later, calling the addition of 500 officers to the subways “outrageous and unacceptable” and declaring that “the state response [is] criminalizing Blk/Bwn New Yorkers in a way we’ve never done with Bridge/Tunnel fare evasion.”

One obvious reason (though not obvious to Bragg or Williams, evidently): Port Authority police don’t chase every toll evader on the George Washington Bridge because the system reads license-plate numbers and sends people bills. “Tolls by Mail” is an official way of paying. Failure to pay your toll, moreover, will result in a violation, and three violations trigger a vehicle-registration suspension. Driving a car with a suspended registration can lead to a 30-day jail sentence for a first offense — for New Yorkers of all colors.

But the technicalities of toll vs. fare evasion are beside the point, and Bragg knows it. The subways are mass transit, meaning that masses of people are contained together in a single conveyance with no means of escape. There is a long history, evident again, of antisocial individuals using the subway system to find victims, and criminals underground do not usually pay their fare. While it’s true that most farebeaters do not beat or rob people, violent criminals almost always jump the turnstile.

It’s terrifying to be on a closed subway car when a hostile, vicious or mentally ill person begins acting out. Such incidents are on the rise underground, as are murders and assaults. If toll evasion in the Holland Tunnel corresponded to a rise in road rage or carjacking, it would make sense to beef up security and pull over evaders before they got away.

Similarly, it makes no sense to promote turnstile jumping by signaling to everyone that it’s OK. This is the real effect of Bragg’s hands-off policies: Fare evasion, the MTA says, is at an all-time high.

I know no one who believes that simple fare evasion merits jail time, and in fact almost no one went to Rikers for fare evasion even before the dawn of our new permissive utopia. But Bragg is sending a terrible message to New York City’s criminals, and they appear to be listening.

Seth Barron is managing editor of The American Mind and author of “The Last Days of New York.”

BPD Community Alert: The Boston Police Department is Seeking the Public’s Help to Identify Suspect Wanted in Connection to a Hit and Run Involving a Pedestrian in Dorchester — bpdnews.com