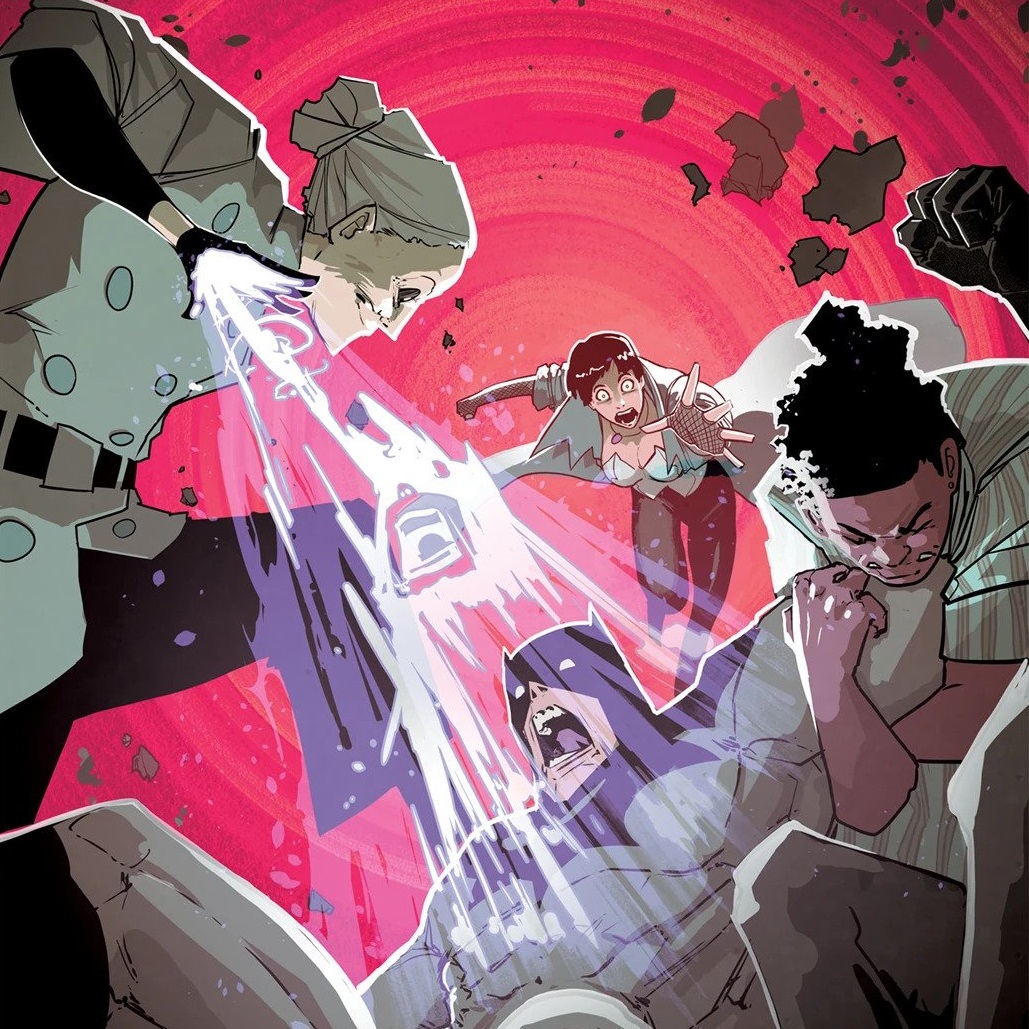 Story #1: Batman and Zatanna in “Bound to Our Will” Part 5 by writer Vita Ayala and artist Nikola Čižmešija

Synopsis: The first story in Batman: Urban Legends #15 begins in the past, as Batman and Zatanna argue. In the present, Eos shows up and confronts Zatanna at the safe house, but he says the shared word and reveals that he is actually Bruce. They have to try and close the rift while Batman does the same on the other side, assisted by John Constantine. Batman reminisces about one of the last times he saw Zatanna, when he went to a cave and eventually pushed her away. Eventually, Batman and Zatanna begin their efforts to close the rift but are confronted by Celeste and Eos. A battle ensues.

Analysis: There is a strange dynamic in this arc in which one issue features very little relationship-building between Batman and Zatanna, and the next invests in it heavily. The discordance is jarring and makes it extremely difficult to follow. Fortunately, the prime objective (closing the rift) is simple enough, though that does not make it any more interesting. Despite the seemingly interminable nature of this six-part story, neither Batman nor Zatanna are written with much depth, instead reaching for overwrought and maudlin dialogue. Soon, at least, this story will end.

Synopsis: The second story featured in Batman: Urban Legends #15 sees Batman chasing a small-time rogue named Brad Sampey. Just as he closes in, Plastic Man intervenes and suggests that the two heroes team up to help Sampey. At the Iceberg Lounge, Penguin laments that his former worker Sampey has decided to give evidence against him. He plots with KGBeast, who is also present. Elsewhere, Plastic Man recounts his own story of redemption enabled by Batman, who rescued him from certain death at Joker’s hands. He then asks why Sampey should not be given the same chance. The two heroes locate Sampey on a boat, but KGBeast attacks from a helicopter. Together, Batman and Plastic Man best KGBeast. Back on dry land, Plastic Man asks Batman to bend the rules for Sampey. Batman replies that the GCPD will expect Sampey within the hour.

Analysis: Whereas I am convinced that the six-part story is one of the major deficiencies in Batman: Urban Legends, these compact one-shots tend to work much better. The narrative obviously has to be tighter, there is no opportunity to meander, and the themes must be clean and appropriately modest in scope. While, of course, depth and development generally must be sacrificed in a single story, I still think a one-shot like this is better suited to an anthology-style book featuring stories of Gotham cityscapes. The theme of redemption and what retributive justice requires is a familiar one in the Batman universe, but it works well enough.

Synopsis: The next story in Batman: Urban Legends #15 sees a Richard Roe commercial featuring the “Memory Lane” app. The team is still struggling with Noah Grove’s powers at Arkham’s cabin, even as Miracle Molly works to protect them. She succeeds in part by suppressing Grove’s vocal cords. As the Memory Lane app proliferates across Gothamites’ phones, Grove’s powers foment discord in the team. Katana grows angry and threatens Shiva.

Analysis: I am more convinced than ever that this is not a Birds of Prey story, but it is still thrilling to see Miracle Molly in action. The story seems to bog down a bit, and it’s not entirely clear how Grove is using his powers when Molly has contained them. Fortunately, this three-part story will wrap up in the next issue, so readers will not have to wait too long to learn how the various threads will come together. The art is impressive as well.

Synopsis: The final story in Batman: Urban Legends #15 begins five years ago, as a kind man selects a puppy with whom to live. Joker breaks through the door, murders the man, and plays a card game for the puppy’s life. The puppy “draws” an ace to top Joker’s king, and the Joker whisks him off. At the present, the cage match begins, but the rogues want to see Batman. Ace and his animal friends do some internet sleuthing to try and locate Batman while the pet cemetery villains hunt them down. The villains find them and set Licks Luthor on them, but he turns on his handlers. Ace and his friends prevail, but at a cost: Chicken dies.

Back at the cage, the rogues demand proof that the Batman being auctioned is genuine. Mr. Tarkov proposes an evaluation of Batman’s fighting ability to prove his identity, and the bear is released into the cage.

Analysis: At least this penultimate chapter does not feature another disquisition on Tolstoy.  I like Ace the Bat-Hound, but this story should have ended in three parts.

Editor’s Note: DC Comics provided TBU with a copy of this comic for review purposes. You can find this comic and help support TBU in the process by purchasing this issue digitally on Comixology through Amazon or a physical copy of the title through Things From Another World.

Batman: Urban Legends #15 is by no means a strong book, but the Plastic Man story is entertaining. It’s still a thrill to see that the Miracle Molly and the two 6-part stories are mercifully drawing to a close.

Tuesday is for jerks – The Comics Curmudgeon

The Lion & the Eagle – Aftershock comics