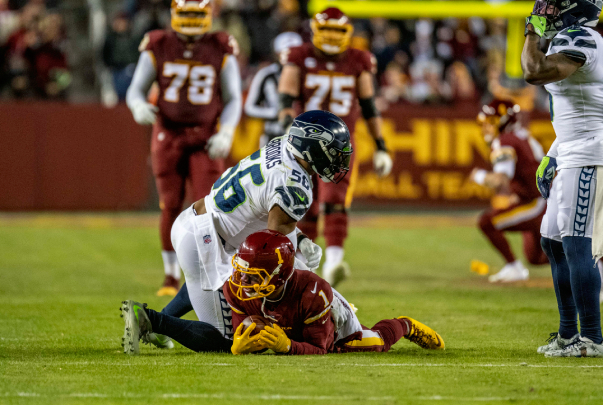 Out of the ashes of this lost season of 2021, the Seattle Seahawks had a star emerge. Outside linebacker Jordyn Brooks lived up to his high draft status and performed like a Pro Bowl player.

12’s shook their collective heads when the Seattle Seahawks chose Jordyn Brooks as their first-round pick in the 2020 Draft (27th overall). Who could blame them? Seattle already had perennial All-Pro MLB Bobby Wagner and his wingman K.J. Wright.

In his rookie season, Brooks played in 14 games. He had 57 tackles, including 2 for loss with 2 passes defended. Not a bad performance, but far from great. Unfortunately, he looked lost in pass coverage at times, and in general, more is expected from a first-round pick.

Fast forward to the 2021 offseason, and the Seahawks brass decided they saw enough talent from Brooks to turn over the reigns of Wright’s outside linebacker spot to him. It was a controversial decision. Wright was/is a fan favorite; he not only wanted to return to the Emerald City but was willing to take a pay cut to make it work for Seattle.

Growing into his role

Brooks improved in all areas this season, including pass coverage. He played with confidence and intelligence. His reads were on point, which allowed him to react to where the ball went as soon as he could get there. It seemed like down the stretch, Brooks got off the pile on every play.

As soon as the Seattle Seahawks defense learns to trust each other to play their role and handle their gap assignments, they will be a unit to contend with once again. Jordyn Brooks will be right in the middle of it all literally and figuratively when it happens.

As the Seahawks move into the 2022 offseason, it will be interesting to see GM John Schneider and Coach Pete Carroll’s moves to improve the defense. At least Seattle has a few pieces of the puzzle; this is not a total rebuild situation. It’s more like a reload situation from a player standpoint.

Related Story: We should have seen this Seahawks season coming

Do you think Jordyn Brooks is the real deal? Let us know in the comments section below or on social media. GO HAWKS!!