The Middle East Studies Association: Why We Should Call It MESA Nostra 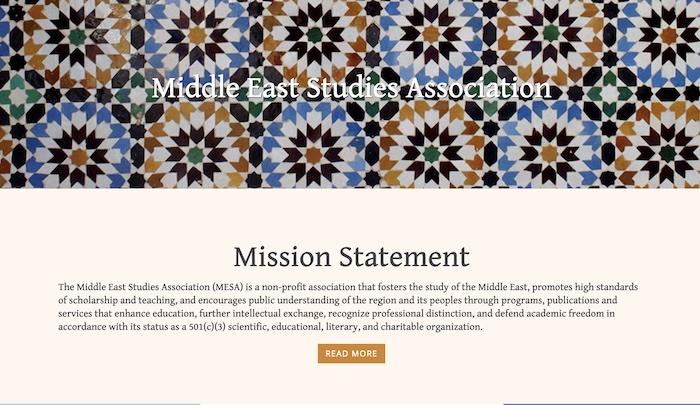 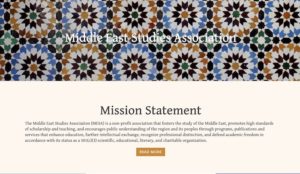 “MESA” is the acronym of the Middle East Studies Association, the professional group of those at American universities and colleges are who are charged with the responsibility of teaching the American young, those trusting, innocent, infinitely malleable young, about the Middle East, which mostly means the history of Islam, and the Islamicate world of Muslims, and the non-Muslim peoples and lands they conquered.

As an organization, MESA has over the past two decades slowly but surely been taken over by apologists for Islam. Many of these are Muslims, and many are non-Muslims. The latter includes a great many who, to get along with their colleagues (and remember, the most political place in the entire universe is a university faculty, and that institution which deserves to be immortalized by a gifted satirist, the Departmental Meeting) follow their apologetic lead. Junior faculty owe everything to, and therefore must curry favor with, senior faculty. If that means signing a BDS declaration, or denouncing the colonial-settler apartheid state of Israel, still harboring its dream of expanding from the Nile to the Euphrates, and responsible or everything that has ever gone wrong with the Muslim and Arab states and peoples, then so be it. The funny thing about being a trimmer or a Vicar of Bray, however, is that the mere act of signing something you really don’t believe can help convince you that you really do believe it, otherwise you would have to come to terms with your own cravenness, your own pusillanimity. And no one wants to do that.

The method of attack on Israel for MESA members is simple: concentrate on the Jewish state’s putative sins, its colonial-settler status, its “occupation” and theft of Palestinian land, its practice of “apartheid” (repeat that phrase “apartheid Israel” ad nauseam), keep clear of such topics as land ownership under the Ottoman Empire, the actual demographics of the Ottoman vilayets and sanjak that made up what became Mandatory Palestine, don’t even whisper that more than half of the Jews in Israel had never left the Middle East but lived as dhimmis in the Yemen (as virtual chattel slaves), in Iraq, in North Africa, in Syria and Egypt — because that spoils the narrative in which all Israeli Jews are “European colonialists,” or – in a another tall tale — are said to be the descendants of the Khazars, a Central Asian people. But “the Jews” definitely did not originate in the Middle East, and please don’t bring up those thousands of archeological sites filled with Jewish artifacts — coins, pottery, oil lamps — that have been discovered throughout the Land of Israel.. Finally, do not under any conditions mention that a goodly number of the ancient “Palestinian people” (invented post-1967 for obvious propaganda purposes) are the descendants of Arabs and Berbers who were veterans of Abd el-Kader’s campaign, or Egyptians who came to “Palestine” with Mehmet Ali, or were Muslims from the Balkans and Bulgaria and other Ottoman territories in Europe who were transferred, en masse, by the Turkish government as the high tide of Islam receded from Europe — for that area (a/k/a in the West as “Palestine”) was the most desolate and under-populated area in the Ottoman Empire, always excepting the Empty Quarter of Arabia).

The method for apologists of Islam consists in discussing Jihad only as an “Inner struggle” to be a better Muslim, in ignoring dhimmi status imposed on non-Muslims, with its many economic, political, and social disabilities, save for the Jizyah, a capitation tax that is suavely presented as the equivalent for non-Muslims of the zakat imposed on Muslims. Sometimes an expurgated version of the Qur’an – such as Michael Sells’ Approaching the Qur’an — is assigned to students. The Hadith and Sira are hardly mentioned. Apologetical works on Islam, on the infantile level of Karen Armstrong’s Islam: An Introduction or John Esposito’s less absurd apologetic Islam: The Straight Path, are assigned. Feel-good nonsense about “Convivencia” in Islamic Spain is provided to unwary students by Maria Rosa Menocal’s The Ornament of the World.

Not everyone who is a member of MESA should be consigned to the outer darkness. There are sensible people, still, especially among the Ottomanists and the Iranian scholars now in exile from the Islamic Republic. MESA is a little like the Union of Soviet Writers, which had thousands of members but fewer than a hundred gifted writers. When one weighs the scholarly contributions of Michael Cook, Patricia Crone, and Bernard Lewis (the latter two are now deceased), against those of the assorted Khalidis and Dabashis and Massads, you can guess which side kicks the beam.

But it is the work of those who are outside both MESA, and the world of academe, that most astonishes.

No member of MESA has done as much to make available to a wide public important new work on Muhammad, on the origins of the Qur’an, and on the history of early Islam, as that lone wolf, Ibn Warraq. No one has produced such a study on the institution of the dhimmi, and the modern phenomenon of “dhimmitude,” as that self-financed scholar, Bat Ye’or. No one has performed the kind of philological examination of the Qur’an that allowed him to reveal its Syro-aramaic origins, as Christoph Luxenberg. No one has done as much to clear up, for English readers, the meaning of Qur’anic verses, as Robert Spencer. It is an unprecedented situation, where much of the most important work on Islam is being done – indeed has had to be done — outside universities, because many university centers are controlled by a kind of Islamintern International. Willy Munzenberg could have learned a lot from Edward Said, who with his Orientalism was responsible for a good deal of this “post-colonial hegemonic discourse” stuff in Middle Eastern departments that permanently stunts the mental growth of professors and students alike.

In any case, even MESA has its constraints. For example a few years ago it had to award, it could not avoid awarding, a prize for the best book of the year to Michael Cook for his 720-page Commanding Right and Prohibiting Wrong in Islam, even though Cook is suspiciously learned, and had also written, with the late Patricia Crone, Hagarism, which showed their willingness to overturn the accepted narrative of early Islam.

Why do I refer to MESA as “Mesa Nostra”? Because it is a kind of “Our Thing” conspiracy, but not nearly as appealing in a folkloric kind of way, as the Mafia, or the ‘ndrangheta, or the camorra, for in Italy the malavita consists of these three main branches. Everyone knows everyone else in MESA; there are the made men, like Rashid Khalidi, Hamid Dabashi, Joseph Massad; there’s the capo di tutti capi, John Esposito, founder of the Talal Al-Waleed Center for Muslim-Christian Understanding at Georgetown; there’s the worry that intrepid sites on the Internet — like this very one — might be exposing MESA’s promotion of BDS to governors of states where anti-BDS laws are now in force. And universities have to worry that if their Middle Eastern Studies departments endorse and enforce BDS, that the bill that was introduced in Congress in 2014, to amend the Higher Education Act of 1965 so as to make institutions of higher education ineligible for federal funding if they participate in a boycott of Israeli academic institutions or scholars, but at the time died, could be reintroduced and this time, with BDS much more of a threat, would likely pass.

How terrible that would be for MESA if Congress were to take away all that government money that the Khalidis and the Dabashis and the Massads et al. want to use to spread their anti-Israel and pro-Muslim messages, their farcical insistence on distracting us with “why-do-they-hate-us?” queries and claims that “only a handful-of-extremists are involved.”

“Mesa Nostra” is my little invention. It communicates the suspect nature, the quasi-criminality, of the enterprise. MESA suppresses unbiased scholarship. It is a Defender of the Faith (of Islam), and a constant critic of Israel. Ask yourself this: could Joseph Schacht, the great authority on Mohammedan law, or Arthur Jeffery, an authority on Islam, on Muhammad, and on aspects of the lexicon of the early Qur’an, both of them once stars in Columbia’s Middle Eastern firmament, have conceivably been hired today at Columbia, where Khalidi, Massad, and Dabashi, those pillars of MESA, now rule the roost?

The Arabs have poured money into the Al-Waleed Center for Muslim-Christian Understanding at Georgetown, the very university where foreign service officers are trained at the Foreign Policy Institute. They have also endowed chairs across the land, like the “Guardian of the Two Holy Places” professorship at Harvard Law School. Do they get their money’s worth? They do, indeed they do.

So that’s why I call it “Mesa Nostra.” Everybody should.