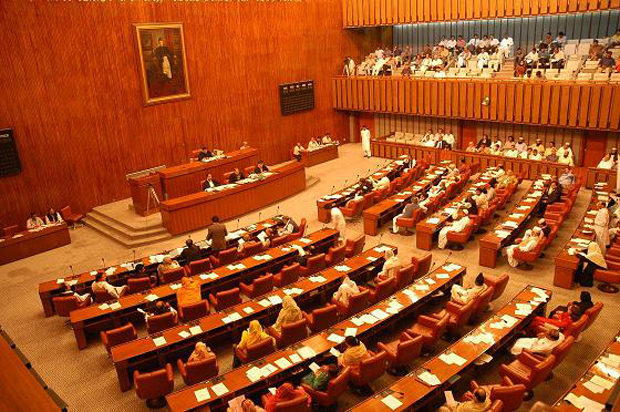 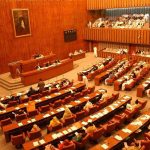 ISLAMABAD: The treasury and the opposition benches engaged in a verbal clash in the Senate on Tuesday over prime minister’s recent statement as well as the rising incidents of terrorism in the country.

The opposition raised slogans during the session presided over by Senate Chairman Sadiq Sanjrani. At one point they staged a walkout against the remarks of the leader of the house, Dr Shehzad Waseem.

Taking the floor, Senator Sherry Rehman of the Pakistan Peoples Party (PPP) criticised the government, saying that it talked about national security on the one hand, but on the other, Prime Minister Imran Khan was threatening the opposition.

She said that uncertainly prevailed in the country. “The prime minister says that I will climb on the container,” she said. “There is talk of presidential system. This would be catastrophic for the country. The Opposition should bring privilege motion against the prime minister,” she added.

Responding to her speech, Dr Shehzad Waseem said that the government had nothing to do with the talk about presidential system. He mocked the opposition, saying that “who would threaten an inept opposition?” He added that the prime minister just held up mirror to the opposition.

At this the opposition started loud protests and later staged a walkout from the proceedings. They returned to the house after Senator Shibli Faraz and Senator Fida Mohammad went to them and asked them to join the proceedings.

Kamran Murtaza said that policy-making should be done by elected people.

Nazir Tarar said that the prime minister has no authority to say what kind of opposition he liked. “We condemn the prime minister’s statement,” he added. “The scourge of terrorism is rising again but the government is using its energies to suppress the opponents.”

Sadia Abbasi said that two operations, titled Zarb-e-Azb and Raddul Fasad were launched to eradicate terrorism from the country. She also criticised the government for starting talks with the Tehreek-e-Taliban Pakistan (TTP).

Afnanullah Khan of the Pakistan Muslim League-Nawaz (PML-N) said that the government should work to stop terrorism. He warned that if timely action was not taken the situation might deteriorate.

Maulana Atta-ur-Rehman criticised the statement of the prime minister. “We must analyse terrorism in the country without any discrimination. Where did this terrorism come from?” Rehman inquired.

Summing up the discussion, Interior Minister Sheikh Rashid Ahmed said that he was happy that the opposition benches also condemned terrorism. He added that 10 policemen were targeted and two terrorists have been arrested in Rawalpindi and Islamabad.

The minister said that there were no more talks with the TTP. He admitted that the number of terrorist incidents had increased since August 15. “We are ready to listen to the Taliban but those who attacked Pakistan’s sovereignty will be confronted,” he added.

Rashid said that the Pakistan forces were fighting terrorism. “Pakistan will not allow attacks on its sovereignty. We will not allow terrorism in the country at any cost, we are with the opposition in the fight against terrorism,” he added.

The minister said that fencing of the country’s border with Afghanistan was complete except a 20 kilometres tract. He mentioned that the heads of state and government from the Organisation of Islamic Cooperation (OIC) would come to Islamabad on March 23.

“All the roads in the federal capital will be closed. On this day, the phones will be shut,” he said, adding that the opposition should not protest on this date.

During the session four bills were referred to the relevant committees. The house passed two resolutions, one in favour of construction of plastic roads and the other about relaxing the age limit for jobs in view of Covid pandemic situation.