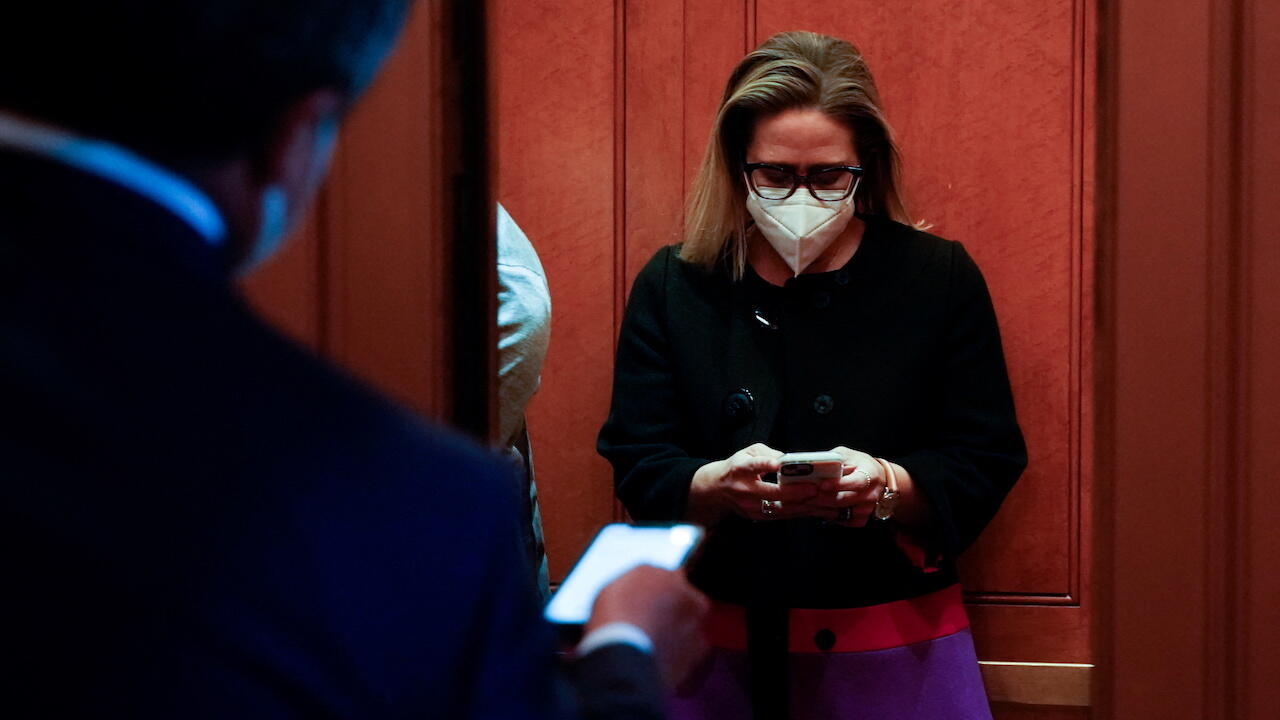 President Joe Biden’s attempt to rally Democrats on Thursday to alter Senate rules and pass voting-rights legislation was stymied, even before he arrived at the U.S. Capitol, by opposition from a key moderate lawmaker.

U.S. Senator Kyrsten Sinema of Arizona said in a speech on the Senate floor on Thursday – less than an hour before Biden’s lunchtime arrival – that the “filibuster rule” that allows a minority of senators to block legislation was necessary to prevent worsening political divisions in the country.

Senate Majority Leader Chuck Schumer nonetheless announced late on Thursday that the Senate will begin debate on the legislation next Tuesday. If Republicans block that bill as anticipated, Schumer said he was prepared to seek a change in the Senate’s filibuster rule to win passage.

While officials were not anticipating any quick breakthroughs, Biden continued pressing his case with Sinema and Manchin into the evening. The two senators met Biden at the White House for a meeting that lasted well over an hour, the administration said.

None of the participants spoke to media afterwards. A White House official characterized the meeting as a “candid and respectful exchange of views.”

Earlier, when he left the Capitol, the president acknowledged his party may not succeed in getting a voting rights bill passed.

“I hope we can get this done, but I’m not sure,” Biden told reporters. “One thing for certain: Like every other major civil rights bill that came along, if we miss the first time, we can come back and try it a second time. We missed this time.”

Sinema & Manchin represent 2.8% of US population but allowing 41 GOP senators representing just 21% of country to block voting rights bills supported by 70% of Americans that would protect voting access for tens of millions. US political system completely broken

They are pushing new legislation that they say would protect access to the ballot, particularly for minority voters, as Republican-controlled states enact new restrictions ahead of Nov. 8 congressional elections.

The Democratic-controlled House of Representatives passed a voting bill on Thursday. But Democrats cannot overcome universal Republican opposition in the Senate without changing the chamber’s filibuster rule, which requires 60 of the 100 senators to agree on most legislation. Democrats hold 50 seats.

“I will not support separate actions that worsen the underlying disease of division in our country,” Sinema said on the Senate floor.

Sinema and Manchin voted in December to side-step the 60-vote threshold to raise the nation’s debt limit without Republican support.

Independent Senator Angus King, who caucuses with the Democrats, said he thought Biden made a powerful case when he met with lawmakers.

“It looks like the path forward is very difficult, particularly based on Senator Sinema’s statement today,” he said. “She believes that the risk of changing the filibuster is greater than the risk of what’s going on in the states. I hope profoundly that she’s right. I fear that she’s wrong.”

The House repackaged and passed two elections-related bills as one, sending it to the Senate under a special procedure preventing Republicans from blocking debate. The bill was approved along party lines.

“Make no mistake, the United States Senate will for the first time this Congress debate voting rights legislation beginning on Tuesday,” Schumer said late on Thursday. Three separate attempts to debate the legislation last year were stymied by Republicans.

Mitch McConnell, the Senate’s minority leader, on Wednesday reiterated that Republicans oppose Democrats’ voting-rights legislation and changes to the filibuster.

Democratic former President Barack Obama wrote in a USA Today opinion piece on Thursday that the filibuster rule has become a tool for the chamber’s minority to obstruct moves supported by most voters.

“We can’t allow it to be used to block efforts to protect our democracy,” Obama wrote.

Our cricketing destiny lies with a fit Kane Williamson